Home Wildlife canines dogs A Video for Rio Tierra Casitas, and a Medical Mystery for Me

A Video for Rio Tierra Casitas, and a Medical Mystery for Me

In early 2010 I had the chance to work on a video project in Wickenburg, Arizona for a bed & breakfast named Rio Tierra Casitas. In truth, they are more expansive than a B&B since they rent out 3 small guest houses for short and long term lodging.  Located along the Hassayampa River Preserve just south of Wickenburg, it is an idyllic spot for hiking, exploring, and enjoying the Arizona climate. After gathering up my dogs for the trip, all four of them,  and loading my video equipment into the truck, I headed down to Arizona.

It’s a riparian habitat, with a narrow belt of huge old cottonwood trees and sand embankments, hemming a meandering stream that runs even in the dry season. During the summer monsoons, the river can swell and flood ferociously. The dogs explored among the trees, many of which had been uprooted and pushed into entangled piles by recent flooding.  Crossing the stream, we quickly climbed up to rocky hills fenced in with barbwire, and beyond that discovered train tracks. That was the end of the preserve, which shadows the river and its twisting sand banks. 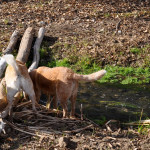 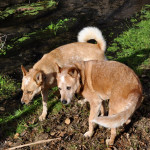 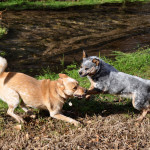 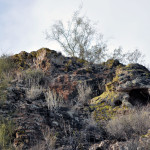 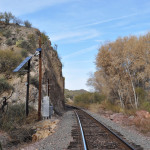 Train tracks along the Hassayampa River 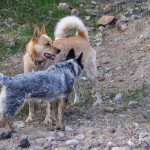 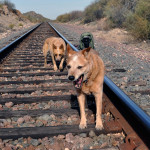 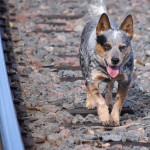 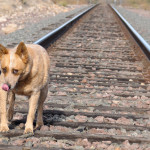 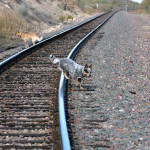 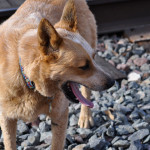 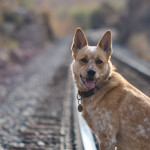 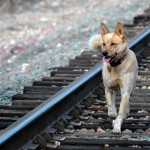 Mirri on the Lookout 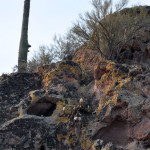 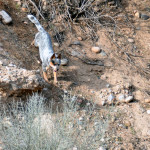 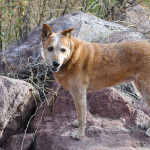 I spent a few days videotaping the houses and the extensive grounds, striving to visually capture the features and vitality of the retreat. Along with the video, I also took numerous digital photos to edit into the project. Although easy to create stills from a video frame, the quality and resolution, using a good digital camera, is superior.

There were two visitors from Canada who stayed at Rio Tierra regularly in the winter months. Articulate and enthusiastic about their stay at Rio Tierra Casitas, they agreed to a video interview, offering a thoughtful testimonial to explain why they enjoyed their stays.

Finishing up, I videotaped the owners, Katy and John, inside their home. They had a short narration in mind to introduce themselves and to explain the appeal of Rio Tierra Casitas. After some lighting adjustments and practice runs, we recorded several lively takes that gave me plenty of coverage to cohesively edit in their introduction and narration.

Back at home, I started sorting through the hours of video. Editing is always the slowest part of a project like this and it can grind on seemingly forever.  I slowly worked my way through the many hours of video and the dozens of digital photos, and began assembling a rough cut using Final Cut Pro 7. (Reluctantly, I switched over to Adobe Premiere a couple years later when Apple abandoned FCP7.) 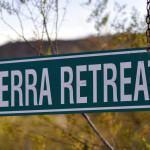 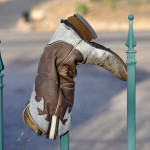 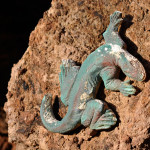 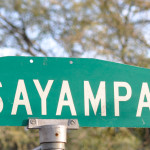 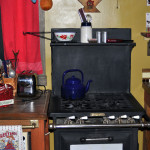 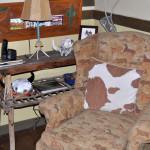 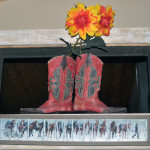 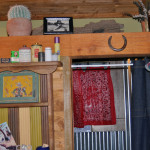 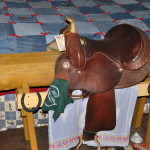 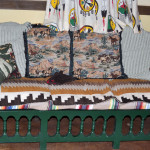 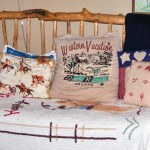 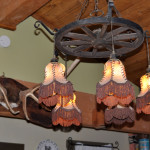 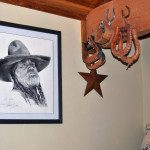 Now let me take a brief medical detour. For most of my life, I’ve had the good fortune to avoid medical calamities. During the period that I was editing this video, however, I began to experience some weird symptoms. It all started with tightness and strange pains in my hamstring muscles. I’ve pulled these muscles over the years, usually playing basketball or running, but it’s one side or the other — not both. The pain didn’t seem to be linked to an injury so I thought it might be wear and tear from aging, and a failure to stretch properly. I started stretching conscientiously, especially before playing sports. Sometimes the pain would go away but then it would come back intensely, at odd times, such as when I was trying to sleep.

After a few months, the pain spread to my hip joints, and then into my upper back, and then later my shoulders. But it was bizarre pain: the pain was symmetrical, almost always occurring on both sides of my body simultaneously; the pain moved around,  sometimes intense in my hamstrings only to disappear there and appear in my shoulders; the pain was at its worst at night, often making sleep impossible; and finally, the pain did not seem to correspond to any actual injury. When I pressed on the area of pain, any pressure made the pain more intense. I had to stop playing basketball or trying to hit a tennis ball. Even fast walking was painful.

I worried that I had contracted Lyme’s Disease or Lupus. A few people agreed and encouraged me to see a doctor. Still, because of the cost and the nebulous symptoms, I avoided seeing a doctor at first. When I mentioned the pain to a friend in an email, he said he knew someone who had similar symptoms and she was diagnosed as having fibromyalgia. He passed on her phone number and she was very sympathetic and helpful when I described the symptoms. The pain was bilateral and attacked both sides of the body; the pain moved around to different areas, and ebbed and flowed during the hours of the day, invariably reaching its apex at night when I tried to sleep.

Her own condition, however, sounded worse than mine in certain respects. She described intense listlessness and general fatigue where she could not even crawl out of bed. My own fatigue was due, I thought, to lack of sleep. Nonetheless, she concurred with the fibromyalgia diagnosis, and added that there was no agreement on causes, and no real treatments or cures. Everything I read confirmed this downbeat account.

Let me pause on the medical mystery, and return to the Rio Tierra Casita video.

The pain was distracting enough to make the video editing process drag out even slower than usual. However, after a few months I submitted a fairly polished rough cut for them to review. They suggested some shortening and asked me to move some of  the key material closer to the front; they were concerned that potential customers, getting restless, would move on before getting to the juicy parts. I agreed that these changes were sensible, and tried to get back to editing. However, I found it impossible to do any video editing or shooting for the next year because I was in such pain and discomfort. As there was no deadline and I hadn’t been paid anything for this video,  I shelved the project until I could focus on a re-edit. It was over a year before I could submit an updated version.

Although I thought the finished video really helped establish the appeal of their retreat, they never used it. Here it is:

This is the Mayo Clinics definition of Fibromyalgia:

Trying to describe the acute pain to friends and family was challenging, and generally I avoided talking about it. If it came up, I told people, only half in jest, that it felt like I had been run over by a speeding truck. Or that in some prank of fate, I had been forced to play nose tackle for the losing team in the Superbowl. One of the more bizarre and acute examples of the pain centered in my shoulders; at times I could not lift my hands over my head without an explosion of pain. If I tried to reach nonchalantly into the fridge, a blast of pain hit me–as if my arm was being ripped out of the socket. After experiencing this multiple times, I  would cautiously press up close to the open refrigerator, and tentatively reach toward an item, careful to avoid straightening or extending my arm. Few people who saw this odd maneuver could stifle a chuckle.

It is standard for people with fibromyalgia to experience tender points, where pressure triggers intense pain. This was true for me although some of my nodes seemed slightly off target, centering on my hamstrings, deltoids, and hip sockets. My skin seemed hypersensitive to both cold and hot water, eliciting something more like pain when I washed my hands or showered with water too far from lukewarm. I began to experience tinnitus, off and on, quite regularly, an annoyance that was new to me. Loud sounds– roaring trucks, motorcycles, blaring speakers, horns, nearby shouts — felt like a physical assault. Bizarrely, little collisions, say bumping into a chair while walking, or having one of my dogs run into my leg, felt, at least momentarily, like a whack with a baseball bat.

Finally, I went to a doctor. He seemed pretty underwhelmed by my symptoms, but suggested specialists and extensive medical tests, none of which I could afford. Reluctantly, I accepted this constant inexplicable pain, impaired movement, and insomnia as my new normal.  My motto was ‘it could be worse’; if I started moping, I reminded myself of all the people who dealt with far worse problems. If someone asked me about my condition, I would present my finest Pollyanna perspective and quip, “Oh, it isn’t fatal, I suppose.”

As I had always been fairly active in sports and hiking, it was difficult to give up things like basketball. However, medical reports pushed exercise as a strategy for ameliorating some of the debilitating effects of fibromyalgia; I found that weight-training, done slowly with high reps and moderate weight, seemed to help so I started doing this regularly. In general, the pain and other bizarre symptoms persisted, but did not get worse, and now they seemed manageable. Becoming ‘normal’, this persisted for three and half years.

In the summer of 2013, one of my dogs, Mirri, only 7-years old, was stricken by kidney disease. It was very stressful taking her to the vet, trying to give her intramuscular fluids regularly, and witnessing her suffer from the disease.

Just as her illness became apparent, I had a distressing accident at the gym. While doing overhead presses with more weight than usual, I made an awkward, lunging exertion to jerk the weight upward one last rep, as if shooting for the Olympic gold. Instantly, I felt an explosive pain in the lower occipital area of my head. Lowering the weight, I stopped and tried to walk it off. Feeling dizzy, with an unpleasant tingling at the back of my head, I sat down. Never having experienced anything like that pain, it was alarming, and I went home.

About an hour later, I felt nauseous and threw up. A massive pounding headache, the worst I’d ever experienced, kept me awake until about 3 AM. Checking the symptoms online, I found it closely matched the sinister ‘thunderclap’ headache, which could indicate breeding in the brain– a subarachnoid hemorrhage!

All the medical sites I checked recommended immediate emergency medical attention to make certain it wasn’t a life threatening burst aneurysm. Gambling that it wasn’t lethal, I put off going to the doctor. The headache was largely gone the next day but returned in a milder form every few hours. What was even more alarming was that my muscle pains from fibromyalgia were extremely intense. Somehow the trauma at the gym had induced my overall body pain to go into overdrive.