Dingoes in the Wild

This post relates closely to my article on the Azaria Chamberlain disappearance at Ayers Rock as some background on dingoes is helpful in understanding what befell her. Additionally, they are fascinating animals, now seriously endangered due to widespread persecution and officially sanctioned extermination campaigns in their Australian homeland. 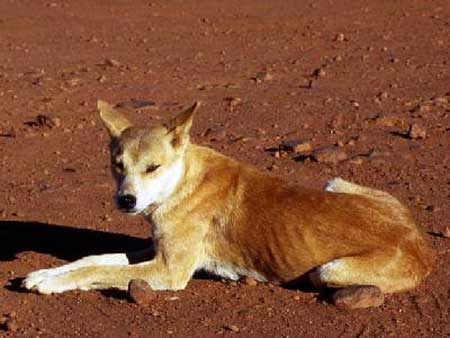 Dingoes are wild canids closely related to domesticated dogs. Although their exact taxonomic relationship to Canis familiaris is still somewhat contentious, they are usually treated as a sub-species. (Many biologists now argue that both domestic dogs and dingoes should be placed with the wolf in Canis lupus.) Dingoes certainly interbreed easily with dogs and produce fertile offspring. In fact, pure dingoes are even disappearing in the outback as they mix with feral dogs.

Only populations on Frazer Island, Queensland, and in extremely remote and arid regions seem relatively free of intermixing. One study by Woodall, Pavlov, and Twyford discovered that even the dingoes of Frazer Island showed crossbreeding with domestic dogs. About 17% of the population, mainly on the southern coast, showed hybrid characteristics. In areas closer to the population belts around Brisbane and the Gold Coast, hybridization reaches 50%. The purest dingoes, roughly 95%, were sampled near Augathella in central Queensland.

Although I occasionally spotted dingoes, it was usually just a puff of dust and a tawny, streaking shape disappearing down a ravine or into scrub, or a phantom canine caught briefly in a headlight beam and then gone. I got a better look at one prowling near Kata Tjuta—the Olgas–in the center of Australia; and I once saw a pair feasting on a road-killed kangaroo near Kings Canyon. They are easiest to observe, not surprisingly, in parks or zoos where they became completely acclimatized to humans. You can often see them, for example, near Uluru where they are semi-tame.

My most memorable sighting was while swimming in a crystalline lake on Frazer Island. Chest deep in the water, I watched a cream-colored dingo circle across a sandy beach as white as sugar. As he prowled the beach perhaps 40 meters away, his alert gaze never left me. Probably he hoped I’d left a picnic basket undefended. After a couple of sweeps of the beach, he turned and disappeared into the trees. 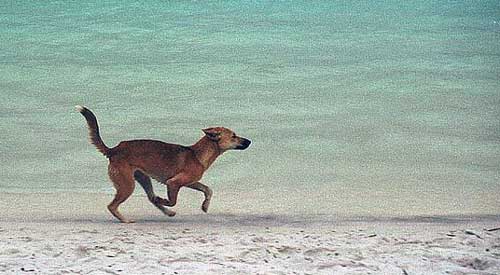 Over the last few years, dingoes have attacked children on Frazer Island, killing one, In response, there has been a horrifically brutal and myopic program launched by the Queensland government to “cull” them.1.

Scientists and animal activists such as Jennifer Parkhurst have stood in opposition to these dingo extermination programs on Frazer Island. These efforts have finally slowed the rush to slaughter one of the last largely genetically pure populations of dingoes left in Australia. However, the dingoes of Frazer Island have suffered a savage diminution in their numbers and habitat.

Laurie Corbett has spent over a decade in the field gathering information on the dingo. Working with a CSIRO team, Corbett studied a group of dingoes in the Harts Mountains about 120 kilometers northeast of Alice Springs. Dingoes breed once a year in fall, a trait that distinguishes them from domestic dogs. This group produced five pups that were born in rabbit warrens. A pair of yearlings joined the parents in raising and training the pups to stalk rabbits. One of the things that most puzzled Corbett initially was how the pups drank when they never went to the water hole. “The mother trotted back from the pool and the pups approached her quietly—not falling over each other and snapping excitedly as they did when she brought them food. They began licking at her mouth and the observers realized that she was regurgitating water for her pups.”2.

Dingoes appear to prefer rabbits when they are available. In northern Western Australia, however, a study found that dingoes formed larger packs and primarily pursued red kangaroos and euros. (Another species of kangaroo–not the currency.)

During a severe drought and a rabbit shortage, the parents schooled the pups to eat grasshoppers until they could find rabbits. When dingoes mass into packs of half a dozen or so, they hunt in well-organized, coordinated packs, pursuing livestock or red kangaroos. They supplement their diet with lizards and carrion when they can. Most dingoes are seen moving solo–especially during difficult times. Employing various howls, they can communicate different messages to other dingoes. 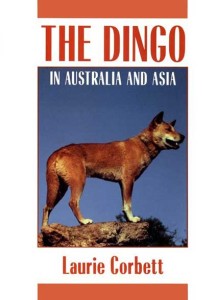 Dingoes in the wild

Although dingoes are generally shy about approaching people, Corbett had one chilling experience during his study. He was observing a pack of seven dingoes at a waterhole. After they disappeared, he emerged from his hiding place to follow them. Suddenly, they doubled-backed and surrounded him. Approaching very close, they stalked stiff-legged with fur bristling. Although attacks by dingoes are rare, Corbett froze in fear. After studying him for a short time, they turned and drifted away.

A 6000-mile wire fence snakes from the coast of South Australia up through Queensland in order to isolate dingoes from prime cattle and sheep country. Bounty hunters known as ‘doggers’ are also hired by state governments to destroy dingoes with traps, guns, and poison. This is another keen illustration of the hypocrisy of Australian wildlife laws; purebred dingoes should be protected throughout Australia.

As Corbett argues, “Large herds of cattle and sheep have destroyed native vegetation in many parts of the Outback and with it the fauna on which the dingo naturally feeds: as a result of man’s tampering with the natural balance, it has been compelled to turn to livestock as a substitute for the diminishing prey species. It is cattle that is the pest species and threatens Australia.”

Although they only arrived in boats from Indonesia about 4000 to 5000 years ago, the dingo quickly went walkabout and mastered the Australian environment, emerging as the top non-human mammalian predator. Turning feral, the dingo probably played a role in the extinction of such marsupial predators as the Thylacine. (If indeed the Thylacine is extinct: there are occasional reports of sightings and odd footprints that tantalize zoologists with the possibility that a few linger in isolated areas of Tasmania or even New Guinea.) 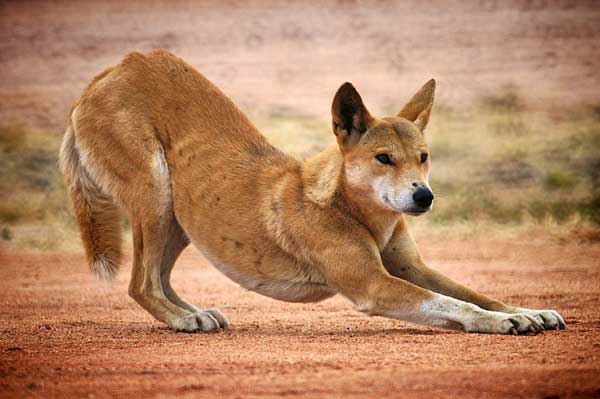 Dingoes never reached Tasmania so it is unlikely that they arrived in Australia before the rising oceans permanently separated it from the mainland around 10,000 years ago. Fossils of dingoes in Australia go back over 3,000 years but a few other finds suggest dates possibly closer to 8,000 years. They appear to be related to native dogs in Indonesia, Thailand, and New Guinea. Skull shape and DNA analysis indicate that the dingo is descended from the Indian wolf– C. l. pallipes.

The dingo occupies a stage in Aboriginal mythology that often echoes that of the coyote in Native American beliefs. The symbiotic relationship between dingoes and Aborigines is sometimes puzzling. Although aborigines kept them as pets and camp followers, dingoes, rather surprisingly, seem to have played a minimal part in hunting, a role where they might have excelled. Possibly dingoes played a larger role before the disruption of Aboriginal societies by the European invasion.

Aborigines sometimes used dingoes on cold nights to keep warm. Dingoes, in fact, became a measure of cold based on how many were needed to keep warm. A typical cold desert evening might be known as a three-dog night, while a truly freezing night became a five-dog night. Instead of stocking up on sweaters and blankets with the approach of an icy winter, you stocked up dingoes.

Tragically, the future of the dingo is threatened. Dingoes are under attack in Australia, much of it by powerful ranching interests that have no interest in protecting Australian wildlife or preserving endangered Australian ecosystems if it interferes with their relentless exploitation of resources. Greed and self-interest appear to be the only values they contribute to the Australian future. Often they buy off politicians and government officials to implement disastrous policies that amount to a war on nature for the benefit of a small coterie of people.

Fortunately, there are people such as Jennifer Parkhurst  and organizations such as the Western Australian Dingo Association, and the Australian Dingo Conservation Association that are trying to stop the needless persecution of Australia’s native dog. They could use your help.