The Myth of the Monstrous Male by John Gordon

This book review was the first piece that I actually got paid to write. It is a book review from the San Francisco Chronicle dating way, way back to August 1, 1982. My parents, at least, were impressed enough to have a copy framed and mounted on the wall. 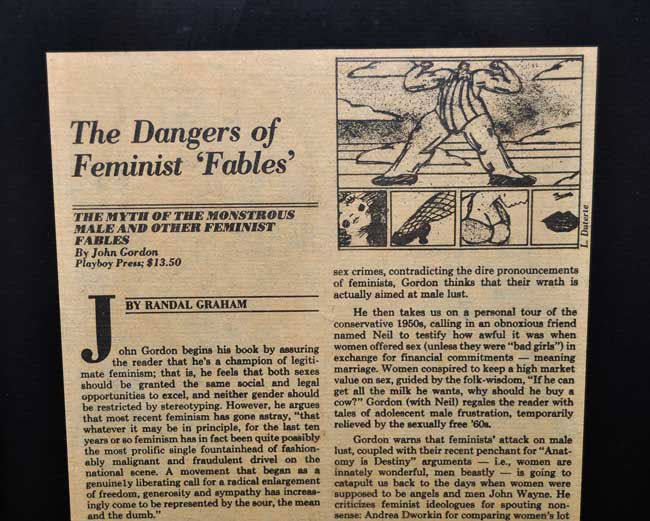 John Gordon begins his book by assuring the reader that he’s a champion of legitimate feminism; that is, he feels that both sexes should be granted the same social and legal opportunities to excel, and neither gender should be restricted by stereotyping. However, he argues that most recent feminism has gone astray, “whatever it may be in principle, for the last ten years or so feminism has in fact been quite possibly the most prolific single fountainhead of fashionably malignant and fraudulent drivel on the national scene. A movement that began as a genuinely liberating call for a radical enlargement of freedom, generosity and sympathy has increasingly come to be represented by the sour, the mean and the dumb.”

Did this really happen? If so, how?

According to Gordon, feminism is returning to its roots among the puritans and the prohibitionists, once again going to war against male lust and sin in much the same way as the Bluestockings, Susan B. Anthony and Cary Nation did before them. Although he exaggerates the connection between feminism and sexual and social prudery, flippantly dismissing the more radical early feminists such as Margaret Sanger, Elizabeth Cady Stanton, Victoria Woodhull and Emma Goldman, Gordon does make an interesting case.

He cites, for example, the Marxist feminist Barbara Leon of the Redstockings, who has written, “not the least of the crimes committed against women under male supremacy is that of our emotional abandonment by men … It is also a starting point for understanding the currently fashionable ‘smash monogamy’ line borrowed from the male left and the counterculture … Smashing monogamy is nothing new for me. They have been doing it for centuries.”

That statement is something that George Gilder and other apologists of the New Right would fervently applaud, and Gordon comments, “That, finally, is what ‘oppression’ means these days — ‘smashing monogamy’ by abandoning or ignoring wives or girlfriends and allowing one’s eye to rove.”

Consider, too, the tremendous time and energy that many feminists are putting into fighting pornography, that undefinable beast. While Gordon grants that pornography is undoubtedly a symptom of dehumanized and commercialized sexuality, he believes it is still absurd to insist that it’s a call to rape and kill women. Considering that empirical studies of pornography show no link to sex crimes, contradicting the dire pronouncements of feminists, Gordon thinks that their wrath is actually aimed at male lust.

He then takes us on a personal tour of the conservative 1950s, calling in an obnoxious friend named Neil to testify how awful it was when women offered sex (unless they were “bad girls”) in exchange for financial commitments — meaning marriage. Women conspired to keep a high market value on sex, guided by the folk-wisdom, “If he can get all the milk he wants, why should he buy a cow?” Gordon (through Neil) regales the reader with tales of adolescent male frustration, temporarily relieved by the sexually free ’60s.

Gordon warns that feminists’ attack on male lust, coupled with their recent penchant for “Anatomy is Destiny” arguments — i.e., women are innately wonderful, men beastly — is going to catapult us back to the days when women were supposed to be angels and men John Wayne. He criticizes feminist ideologues for spouting nonsense: Andrea Dworkin for comparing women’s lot to Jews in concentration camps; Susan Brownmiller for claiming that all men are rapists or rape supporters; Marilyn French for suggesting that deep down all men are Nazis; Mary Daley for accusing male gynecologists of conspiring to shorten women’s lives; and all the feminists who tried to capitalize on the suffering of blacks by claiming that women, too, are “niggers.”

The book has numerous flaws. Gordon sometimes falls in the same spiteful tactics that he attributes to the feminists: his scholarship is slipshod (no footnotes, no way to check his facts and quotes), his arguments are often nothing more than silly gossip, and he often descends into ranting and name-calling.

Arguments that he doesn’t care for are often dismissed without any serious effort at refuting them; for example, feminists who complain about the effects of mass media are childish and stupid, Gordon says. But he totally ignores the substantial body of evidence that supports feminist views that media and advertising have a powerful influence on people’s attitudes and values.

Despite its flaws, I highly recommend the book. It’s written with passion and humor, and even where I think he’s wrong, Gordon raises some interesting points. Feminism, as exemplified in the writings of Germain Greer and Shulamith Firestone, has a vast potential for improving the human condition; but only if it keeps itself open and flexible. Gordon’s book can provoke thought and debate on a subject that threatens to become ossified with dogma and self-righteousness. Feminism is too important to be left to the professional feminists.