“And now you know: Life is held on loan. The price of life is death.”

He who has gone, so we but cherish his memory, abides with us, more potent, nay, more present than the living man.

“Space… the Final Frontier. These are the voyages of the starship Enterprise. Its five-year mission: to explore strange new worlds, to seek out new life and new civilizations, to boldly go where no man has gone before.” 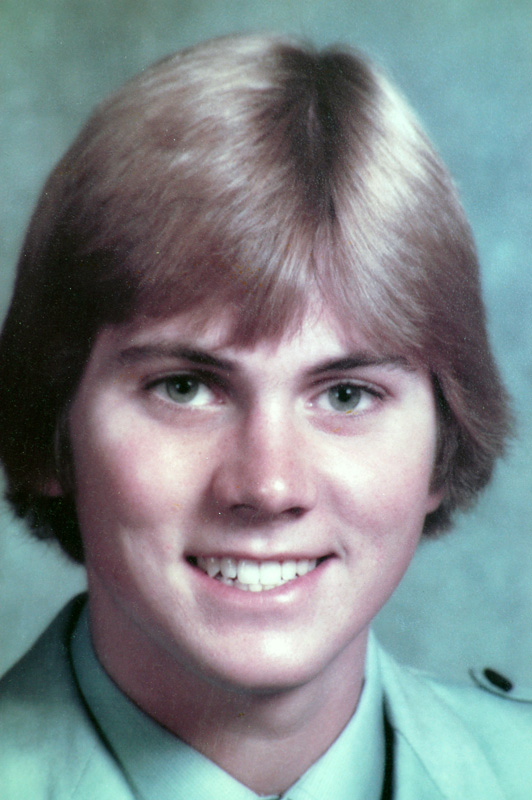 A Lutheran, I can affirm, Brett was not. He was a Trekkie–a more forward-looking and mind-expanding religion. For those of you just wandering in from a nomadic life in the Gibson Desert, a Trekkie is someone with an inordinate fascination, bordering on obsession, for the science-fiction extravaganza known as Star Trek.

When Star Trek first aired in 1966, Brett was 3 and I was sleeping in French class at junior high school. I was already a fan of science-fiction writers such as Theodore Sturgeon and Harlan Ellison, both of whom, coincidentally, wrote some of the best teleplays for the original Star Trek. Because of my interest in science-fiction, I was instantly hooked on the series and remained a devoted fan throughout high school. By the time Brett developed his passion, however, I had moved on to other interests. 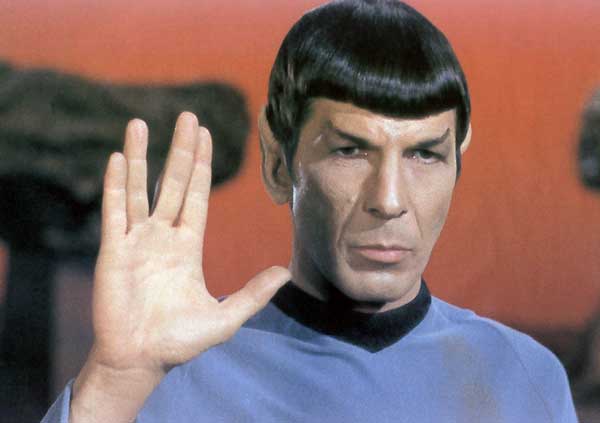 When I left home at 18, Brett was 7. I remember a well-behaved little boy who didn’t seem much trouble at all. (I could be mistaken.) Shortly after high school, I moved to Australia for a year and half. When I returned I lived in Sacramento and Berkeley while Brett was attending Stockton Junior High and later Stagg High School. Because of this, I have sketchy memories of Brett during his high school years when he was involved in swimming, water polo, and music.

I recall a visit back home to Baker Street when Brett was 17. Engrossed by books on hypnosis, I was looking for victims…er, subjects. After we went through the process of trying to put Brett into a hypnotic trance, he told me afterward that he had, indeed, been hypnotized. I suspect he was only humoring me.

Later on when Brett began to manifest the psychological problems that undermined his efforts to pursue his education and a career in architecture, I was living in Berkeley and did not get back to Stockton that often. After leaving Berkeley, I moved to Arizona and my visits home came even less often.

As part of his condition, Brett developed a reluctance to wander far from his home on Baker Street. When I invited him to visit me in Arizona, he responded as if I were asking him to take a voyage to Mars using party balloons. He was comfortable with Intergalactic travel aboard the U.S.S. Enterprise, but hell no he wasn’t venturing into the wilds of Arizona.

His condition made socializing challenging and most of his school friends drifted away. Brett was often terse and brusque. Terse and brusque enough to make Clint Eastwood’s Dirty Harry character look and sound like Pee Wee Herman. People who knew him, however, and saw past his gruff exterior–and occasional jarring comments–realized that he was innocuous, witty, imaginative, and struggling to be helpful.

He sometimes put on airs of officious superiority like an imperial British colonel slumming among the natives. He created rather grandiose titles and business cards that included phrases such as, “Computer communications conveyancer.” This façade was a coping mechanism, a way of enhancing his self-esteem when many avenues open to others such as careers and professions, marriage and children, financial success and public accolades, were closed off to him. When faced with hurt and injury and frustration, people compensate. Not surprisingly, a lot of Brett’s energy and interest went into films and music.

He was fascinated by Madonna, an enthusiasm that I shared not in the least. He was seemingly surprised by my utter lack of interest and told me that she had sold millions, maybe billions of CDs. He had several posters of her including one from the film Desperately Seeking Susan, a film that I had actually liked but rather for the charming actress Roseanna Arquette—not Madonna.

He also had a great passion for James Bond and would always query me if I had seen the latest Bond flick. As I gave up on the series somewhere around From Russia with Love, he was always disappointed by my apostasy. I promised always to catch the flick in question and this seemed to satisfy him. 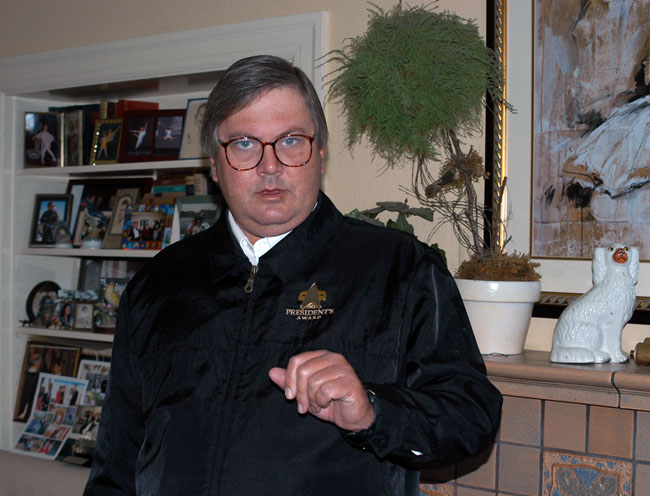 We did share a passion for Spaghetti Westerns. For one of his birthdays, I think it was around his 35th, I gave him a copy of The Good, the Bad, and the Ugly. He seemed pleased. How pleased I found out roughly six months later when I returned from Arizona and he told me that he had watched the film 56 times. Now he may have been exaggerating and he may have been guessing. On the other hand, I would not have been surprised if he had watched it exactly 56 times. He did tell me that his VHS copy wore out and he replaced it with a DVD.

Brett enjoyed the rituals of Holidays. He always wanted a Christmas tree with sundry decorations and bright boxes under the branches. Oodles of candies festooned the house on Halloween–and just about every other day as well. He enjoyed loading arcane anti-spy software and RAM boosters on computers, and commonly used my aunt’s computer for his Nevada testing grounds. Eventually, her computer was so paralyzed by layers upon layers of geek grit that it moved like old cement.

Brett ran a tidy ship on Baker Street. He did the watering and most of the yard and lawn maintenance. When an ‘outsider’ was called in to cut trees and tear out vines, Brett defended his yard like a junkyard dog. He ran the vacuum cleaner over the big house sometimes twice a day, threatening to wear out the carpet. He shopped and fixed meals for his family—especially for his father. Brett specialized in old-fashioned food: stews and casseroles, baked potatoes and roasted chicken, rice and beans. Not French gourmet perhaps, but he had a command of tasty basics without ever consulting a cookbook or watching a food diva on TV.

His drive to clean and cook according to his own schedule often led him into overkill. He installed a new sprinkler system in my aunt’s yard and then took such a keen interest in his new creation that she soon found herself with a $500 dollar water bill. Under a scorching July sun, I was stunned to see vast mushrooms growing out of my aunt’s grass on Edison Street. He kept the backyard on Baker Street so moist that you felt you were in a Costa Rican rain forest. You almost expected to hear the screech of a macaw or see a monkey scampering overhead. On occasion, he would water in the rain. Now maybe that’s counter-intuitive but I’ve seen the Stockton Park’s Department watering the park in the rain, too, so he was not alone.

He was kind to animals–especially his dogs, Maggie and Mango. Brett took his kindness to such lengths that he stuffed the dogs with hot dogs, hamburgers, and goodies. Mango is the wiry type who never gains weight. Maggie, however, became the world’s only mixed breed cocker spaniel with the girth and heft of a St. Bernard.

Mango and Maggie miss Brett. Mango whined for days restlessly after Brett disappeared from their lives. Maggie escaped from her downstairs area one day, bounded (slowly) up the stairs, and searched for Brett in his room. She sniffed at his shoes and clothes, and peeked under his desk as if he might be hiding there.

Although his daily dress usually consisted of shorts, tennis shoes, and a baseball cap, Brett had a stylish side as well. He would sometimes pop up in slacks, dress shirt, and expensive suspenders–looking more like a successful attorney than a guy working from home. Given access to charge accounts at clothing and hardware stores, he racked up hefty debts until his parent’s had to close them–or face bankruptcy. His mom jokingly called him, “J. Paul Getty” on more than one occasion.

When I first heard the shocking news of his sudden death, I felt Brett had suffered a short and tragic life. On reflection, however, it is more complex. Sadly, his life was cut short. Nonetheless, he found a safe harbor in the family home during his life, and the support from his family never waned. Despite his problems, he developed his interests in computers, science-fiction, and music. He had a role as a caregiver for his grandmother and father, and he gave back to his family with his work, his humor, and his love, which he expressed in his own fashion.

Knowing my interest in Star Trek, Brett would occasionally administer a playful Spock pinch to my shoulder. Other times Brett might offer the famous Vulcan hand salute and blessing, “Live Long and Prosper.” More often he would quiz me on the best Star Trek episodes, offering situations or lines of dialogue. “How did Kirk explain Spock’s ears in City on the Edge of Forever?” I remember that one because it was one of the few that I got right: as a child Spock had supposedly gotten his head caught in a mechanical rice picker. Of course, we all know that Spock’s father was a Vulcan–and Vulcan’s have pointy ears. 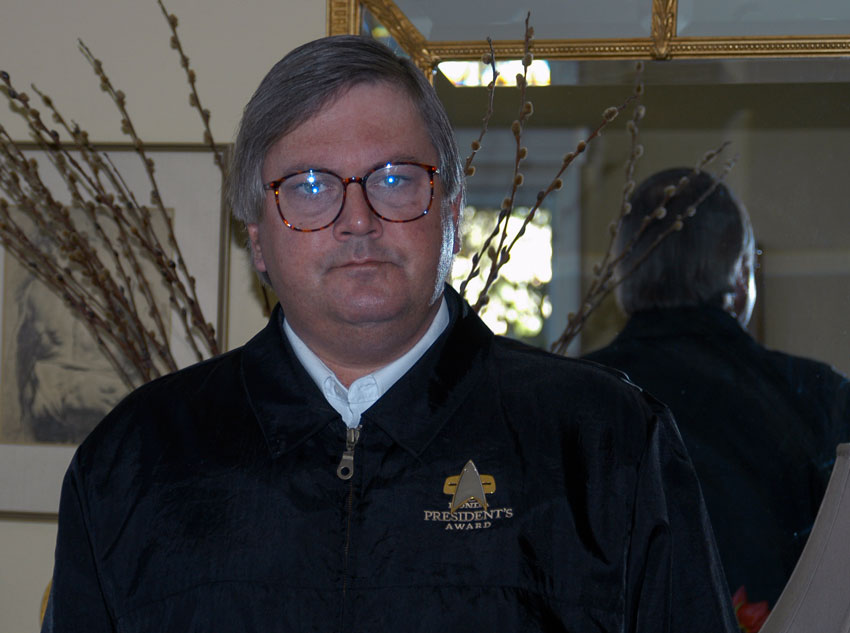 Our last encounter was emblematic: he came into the room while I was watching a college basketball game with our father. Brett passed a toy Star Trek medical scanner over my back as if checking me for serious injuries.

I turned to him. “Well, Doctor McCoy, see anything wrong?”

Brett’s life was cut far, far too short and I miss him. He did not get a chance to say goodbye to his friends and family, but I think I know what he would say to us: